Going Back to Work While Grieving 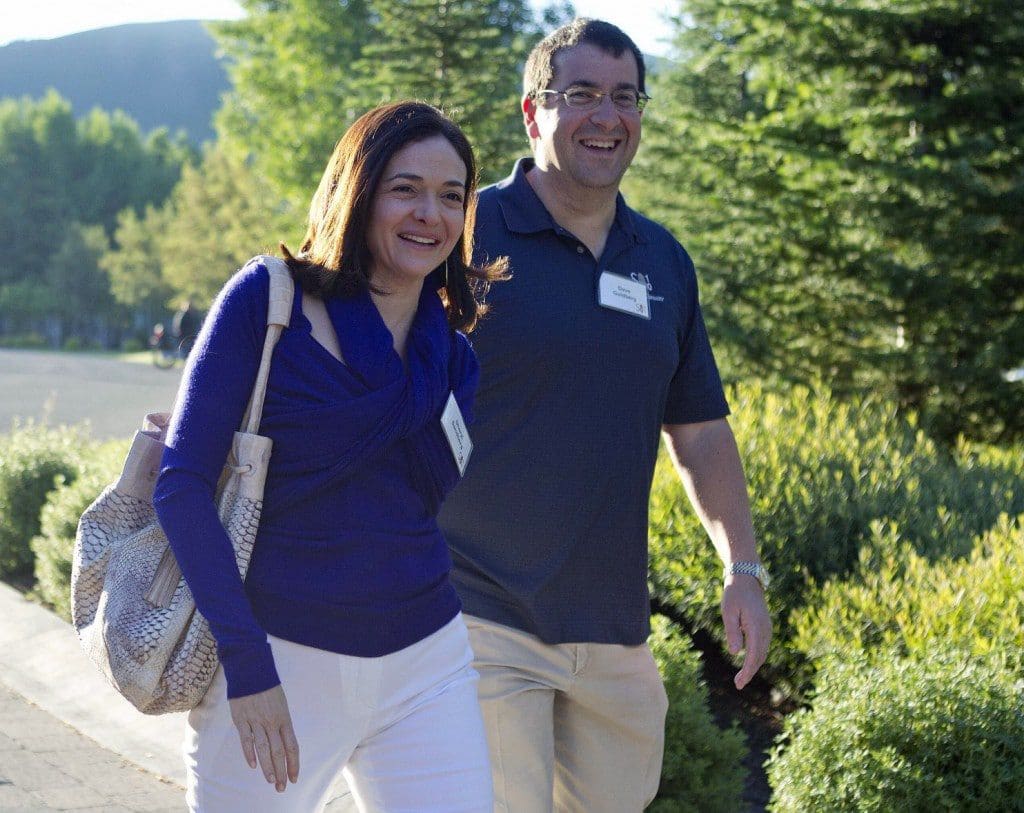 In this July 6, 2011 photo, Facebook COO Sheryl Sandberg and her husband, David Goldberg, CEO of SurveyMonkey, arrive for the Allen and Co. Sun Valley Conference, in Sun Valley, Idaho. Goldberg died in an accident while exercising at a resort in Mexico on Friday, May 1, 2015. (Julie Jacobson, File/Associated Press)

This week Facebook COO Sheryl Sandberg is transitioning back to work after her husband died May 1 in a tragic treadmill accident. She will begin by working at the office just during the hours when her children are at school and will not be travelling for the foreseeable future, the company confirmed. Her decision to return was based on "advice from child psychologists who suggested that kids often benefit by trying to get back to typical routines quickly," according to a report by Kara Swisher of Re/Code.

Every decision someone makes about mourning — whether in the public eye or not — is a personal one, and should remain so. But all the attention paid to the unexpected loss of Sandberg's husband, the well-liked Silicon Valley executive Dave Goldberg, has prompted many of us to ask ourselves some difficult questions. What would we do if thrust into the same horrible scenario? How could we ever get back to the day-to-day? And how long would our employers ever actually let us stay away?

The answers to the first two questions are deeply intimate ones. The answer to the third is a bit more straightforward, though employees often have no idea what it is until they're in the unfortunate position to ask. Bereavement leave "is a very quiet, hidden kind of policy in many organizations," said Carol Sladek, who leads work-life consulting at Aon Hewitt. "A lot of HR people don't even know."

It turns out that about 85 percent of companies offer bereavement leave as a benefit, according to data from the Society for Human Resource Management (SHRM), and surveys have shown that the typical policy is three to five days. The exact number frequently depends on whether the death is in the immediate or extended family.

There have been efforts at the federal and state level to mandate some kind of minimum floor, however, at least for unpaid bereavement leave. On Tuesday, a bill co-sponsored by eight Democratic senators and a companion bipartisan bill in the House was introduced that would amend the federal Family and Medical Leave Act (FMLA) to include parents who are grieving the death of a child.

The FMLA already provides unpaid leave and protects employees' jobs for 12 weeks under certain conditions, such as childbirth or caring for family members with serious health issues. Yet, it currently doesn't cover bereavement.

This is the third time a version of the bill has been introduced, but the first time it has bipartisan sponsors. That has given Barry Kluger, who lost his daughter in a car accident in 2001, higher hopes it could go further this time.

"We started to hear stories of parents who lost a child but had to come back to work after a week or so," said Kluger, a public relations executive who co-launched an initiative to amend the FMLA. "Many companies are compassionate, but we think, bottom line, this was an oversight in 1993" when FMLA was first introduced and did not include bereavement leave.

A couple of states have also made similar efforts. In 2014, Oregon became the first and still only state with a law requiring employers to provide bereavement leave. It amended the state's Family and Medical Leave Act to allow grieving employees who meet certain qualifications to take two weeks unpaid. A spokeswoman for the National Partnership for Women and Families said in an email that the California legislature passed bereavement bills three times in the past decade — in 2007, 2010 and 2011— but each one was ultimately vetoed.

For now, with the exception of Oregon, it remains up to U.S. companies to set their own minimums, and what they offer in the employee handbook and what they do in practice can vary widely. "This is one that is so emotionally charged and so rare," Sladek said, "that the manager probably has more room [for flexibility] than in any other area."

As a result, companies are often more accommodating than what their policy officially provides. Bruce Elliott, manager of compensation and benefits for SHRM, said, "there may be some Scrooges out there, but most good managers say: Do what you need to do."

So what does that really mean, especially for employees who don't have much leave or vacation time saved up? Both Elliott and Sladek said nothing is typical when it comes to the unexpected death of a child or a spouse, as Sandberg experienced. They've seen employers cover anything from an extra week to several months. In these difficult circumstances, they also have seen companies, at times, grant leaves of absence or have employees go on short-term disability if they're experiencing depression or anxiety.

"What is effective for each person can't be measured," said Russell Friedman, the executive director of the Grief Recovery Institute, a nonprofit that offers grief seminars and training for grief counsellors. "The real key for organizations is to have their managers just be more human."

Via Going back to work while grieving - The Washington Post.