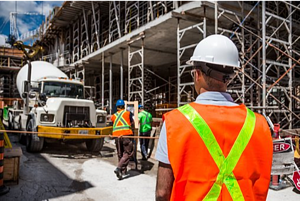 Have you ever gone to work and thought, “if I died today onsite, would it be an acceptable risk my company was willing to take? Is that just the risk to do business?” Well, it used to be that way. During the building of the Empire State Building, there was a recorded five deaths on the project. Eleven men died during the building of the Golden Gate Bridge. It was an acceptable risk to calculate that a certain amount of workers would die.  Have we not evolved from this? Safety has, but it seems like the workforce still wants to sacrifice themselves for their company. Why? Who knows.

That’s what confuses me about workers today is how much safety is still looked down upon.  Safety’s job is to protect you. I was a safety officer during my career, and I am well aware that large majorities of people hate safety, for whatever reason. Being that it slows down production, your safety officer is a jerk, or people don’t like being told what to do. Whatever the reason may be, it makes no sense to me. I’ve seen both sides of the fence, and I understand both viewpoints. So, when I meet people who hate safety, I always ask them, “would you like it if no one cared about what you did on a job site, or that if you died or were exposed to a hazardous substance, that you would be an acceptable loss to the project?”

For hundreds of years, people have died testing and experimenting on things that we use today to be safe. I always think about the person who invented the welding shield. How many eyes were destroyed in order to find out what could be done to protect them?

I was happy to work for multiple companies that were very concerned with safety. Personally, it was nice to know that my company cared for my well being and that they wanted me to work safely. Not only daily hazards but hazards that may affect me later in life. They would provide me with the knowledge and equipment to keep me safe. Not just say, “whatever get the job done!” If something took an hour to set up for ten minutes of work, that’s acceptable. Not me risking death or exposure because I can do it in ten minutes unsafely because my boss wants to get his bonus for completing the project on time? What do I get from that? Think about it.

We all learn from our mistakes, and I would be a liar if I said that I was completely safe during my career. In fact, I most definitely was not. However, I was one of the lucky ones to both not get seriously injured, as well as accept safety before it was too late. I have worked with three people that weren’t so lucky.

So, take the time to get what you need to work successfully. Even if it takes you twenty minutes to go grab a harness, be sure to go do it. Your company is telling you to take the time you need to do things right. I don’t know what better power a worker could have and why it's such a hassle to stop work, slow things down for a few minutes, go to the tool crib, get what you need and come back and do the task safely.

Deadlines and schedules will never go away; welcome to construction. That’s never going to change.  I have never been on a construction site that I heard, “Hey everyone, we are ahead of schedule; let's just slow down and relax.” It just doesn’t happen.

So instead of fighting safety, start making time for safety. Plan ahead. Think ahead at the tasks that you will undergo on a project and get your safety supplies in order as soon as possible; not at the last minute once the project is started. People have already been injured or died to make sure that you don’t.